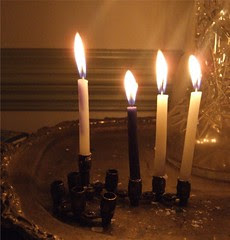 Third Night
Originally uploaded by Teckelcar
Friday night was the start of the third day of Hanukkah and was also Larry's birthday. We had a lovely dinner of flank steak with latkes and a lovely Pino Noir we had been saving. For dessert I made Chocolate Sybil cake, a truly scrumptious chocolate cake that is dead easy to make.

However, that morning I also went horse back riding for the first time in oh... 18 years. It was a lot of fun and I'm proud to say I lasted an hour and did not fall off the horse. Unfortunately my calves made it very plain to me that I was a very bad person and it took a big dose of ibuprofen to get them to quite down (Yay, better living through chemistry!) So I was just plain wiped out at the end of the day. It's a minor miracle that I even took pictures. But... I did take pictures and this is our bicycle chain menorah. I found it at a funky little store in Careytown called Ten Thousand Villages last year. It's simplicity called out to me. Coupled with my renewed interest in biking , I couldn't resist it. 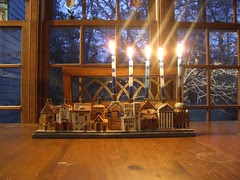 Fourth Night
Originally uploaded by Teckelcar
Saturday night was the fourth night of Hanukkah which we got to celebrate with my in-laws who had just come down for the weekend. Coincidentally it was also my mother-in-laws birthday. After a quick candle lighting we skedaddled out for dinner at Weezie's and the 7:15 show at the Byrd Theater.

The food, as always, was fabulous. The movie, The Legend of the Guardians: The Owls of Ga'Hool, was less so. It wasn't a bad movie (the CGI was impressive), but it really butchered the books. At least we had Bob and the mighty Wurlitzer and only paid two bucks a head.

So as you can see we have been a bit busy with even more to post later.
Posted by Sarah at 10:41 PM