What Is This, New England? 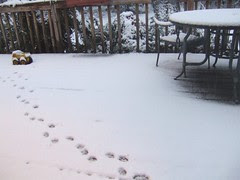 pawprints
Originally uploaded by Teckelcar
Monday morning we were greeted with this rather unexpected sight, an almost two inch blanket of snow.

It had been raining heavily all weekend and in the wee hours of the morning the temperature dropped and the rain quickly turned to snow. The branches have are almost artistically frosted with snow and the flakes lay thickly on the deck and lawn, much to our dogs annoyance.

The kids, however, were delighted. But the roads had remained clear and school was still on. It didn't even rate a two hour delay.

The next big surprise has been the temperature. Normally It will be well above freezing during the day and come late afternoon the snow will be pretty much gone. Not so this time, the mercury has stubornly refused to go above freezing and the nights have been dipping down to the upper teens. It feels more like New England than the Mid-Atlantic.
Posted by Sarah at 9:00 PM