One in the Hand Isn't Always Better 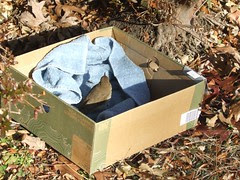 Bird in a box
Originally uploaded by Teckelcar
Yesterday I learned that having one bird in the hand isn't always better than two, or really just one in this case, in the bush.

I had the van out in the driveway with one of the big doors open. I was clearing it out and shifting things about. It was nice out and I was in no big hurry so at one point the van was just sitting in the drive unattended.

Nate raced by to pick up a package and out of the corner of his eye he saw a brownish flurry of motion by the van followed by a clunk. When he came back he peered into the van and saw a little bird keeled over on his seat. The poor thing was still breathing but on its side. With a stick Nate gently righted the bird and then returned indoors to report that there was a bird on his seat. 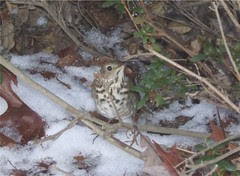 one in a bush
Originally uploaded by Teckelcar
I didn't believe him at first, but in the end I went to look for myself. The poor thing looked very distressed, eyes shut and breathing heavily. I went back inside and tried calling the local nature center for advice. The call went straight into voice mail so I then tried ARK. Again I went into voice mail, but the Audubon Society's page linking to ARK was very helpful. I gathered up a small towel and a large shoebox and went to the van to see what I could do for the little wood thrush.

The bird was looking a little better, It was sitting up with it's black eyes wide open. However it was still very addled and it was even trying to escape. I gently placed the towel over the bird and oh so carefully scooped it into the box. I settled the towel around the bird, placed the lid on the box, and brought the box into the garage where it was a wee bit warmer. An hour or so later an ARK volunteer called back and instructed me to just place the opened box under a bush (is there were no cats present) and let the poor thing sort itself out.

The bird was very polite and waited for me to fetch my camera before flitting out of the box. It went through the bush and landed on the other side. It stood there for quite some time, most likely getting its bearings and dealing with a wicked headache. I was able to approach it and again it allowed me to take a few pictures. We all left the little ting again and an hour later it flew off. A very satisfactory ending.
Posted by Sarah at 11:54 AM

Lucy says that sounds like a happy Christmas to her.