Artist of the Week: Champion of Record 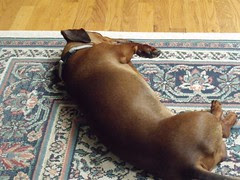 Part of the deal when we got Dell was that ideally he would be shown and, hopefully, earn his championship. I'm a fair handler albeit rusty, but his co-owner and friend is a wonderful handler. She would be more than happy to show the boy, all I had to do was keep him fit and pay entry fees.

So we have been showing him on and off for a couple of years now. To become a champion (at least in AKC's eyes) Dell needed a total of 15 points, which are earned by defeating other smooth dachshunds with a point scale assigned by the number of dogs entered. The more dogs, the greater the number of points, which range from 1 through 5. With the absolute minimum number of dogs in competition being 2 (you have to beat at least one dog to get a point). Also point totals of 3, 4 and 5 are called majors and the dog must earn two majors under two different judges.

Dell initially racked up the points, but lately we've had a bit of a dry spell. Our problem was that in order to finish Dell he needed one more major. The the economy being what it is and the cost of gas people are no longer showing as much. The most frustrating was when one time Dell won and the major broke. There had been enough dogs entered, but one didn't show up in the ring and as a result there wasn't enough dogs to qualify for three points, so the points dropped down to just two (ie the major broke).

All through out his campaign Dell has been his cheerful goofy self, giving kisses and wagging his tail. We had even passed him off to other handlers and each time they had nothing but praise. One person even gave him a ride from the show back to near where we lived and confessed that it was very tempting to just keep him for herself. She never would, but if Dell needed a home...

Anyway this past weekend Dell finished and finished big. He became a Champion on Friday and the next day earned a Select ribbon in the class he was moved up to. What made it even more impressive was that a Junior handler (ie a child ranging from 9 to 18) showed him both days. Our handler is very good friends with the child's mom and they ended up swopping dogs all weekend. Dell didn't care, he was just happy to be there and have people pay attention to him.

However the whole ting was exhausting and he's happy to be back home.
Posted by Sarah at 11:48 PM

Labels: Artist of the week, Dell

Congratulations to Dell, and to you for your perseverance in entering him and seeing he earned the points!

Never thought about it before - shows can be doggy heaven, all those other dogs around, all the people making much of you- glad he enjoys it!