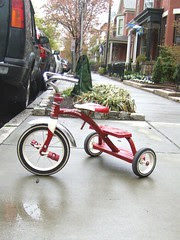 city trike
Originally uploaded by Teckelcar
This week's theme was just for fun and I was able to find an image right off the bat.

I took this picture last Sunday after I had dropped the kids off at Hebrew school. It had snowed that morning and I decided to snap a few pictures before retreating indoors to read a book while waiting for school to end.

There is a cute residential street just a block over and decided to would be a good place to find appealing subject matter. I love taking pictures of flowers covered in snow and I knew there are plenty of flowering plants in both gardens and pots along the street.

I was not disappointed. However my favorite image was of this lone bright red tricycle parked on the sidewalk. It had clearly spent the night outdoors and was wet with melted snow. I loved the trike and how it was reflected in the puddle on the sidewalk.

Originally I had only my cell phone, but I eventually fetched my camera to take a higher quality picture. It was only an hour later, but all the snow was gone and the puddle was quickly disappearing. I was pleased enough with the second, drier picture and decided that this little bit of childhood on the city street was a good candidate for "just for fun."

Because really, bright red tricycles are just for fun.
Posted by Sarah at 11:49 PM