Artist of the Week: Mola 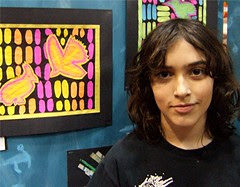 Nate with his mola
Originally uploaded by Teckelcar
This week it's Nate's turn to be the artist.

This is my last picture of him with his long hair. Oh, it's still long, just not flowing to his shoulders. He wanted the haircut and after the initial shock (really it was just an inch and a half, but his natural curl makes it look shorter) he basically likes it. One of these days he is going to go for a crew cut, but not for a while.

The funniest reaction was at school the next day. Nate told me that one friend blurted "It's not long any more! You don't look like Jesus anymore!"

And honestly, we thought it was hilarious. 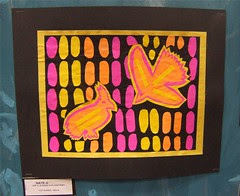 Nate's Mola
Originally uploaded by Teckelcar
As for the not so flowing locks artist it turned out he too had an artwork at the school district's big arts and sciences show. He decided that since Max and Rebecca had given Larry and I their invitations he didn't have to bother. Nate knew we would go and he would tell us when we got there. That and the invite got lost in his backpack.

Earlier in the year he had Art class. The class explored various forms of art one of which being molas. And as a side note reading about molas has made me realize that my decision nigh on twenty years ago to have one sewn on the back of my jean jacket was very appropriate. Anyhoodle, in Nate's class they made molas out of construction paper.

The colors he chose are vibrant and contrast beautifully with the black overlay. Nate did a lovely job on the animal cutouts and captured the essence of the mola. It immeadiately made me think of the one I have that once was on my jacket. I need to dig it up one of these days and take a few pictures.
Posted by Sarah at 11:07 PM