MCP Project 52: What others think 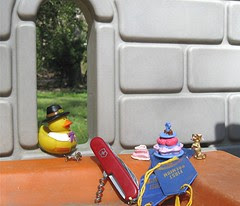 What others think
Originally uploaded by Teckelcar
This week was another theme I was less than thrilled with, but I think I basically fulfilled it.

I originally was going to take a bunch of pictures and make a photo collage. However, I got lazy/ inspired and settled on a still life instead.

The duck has about three aspects going for it. Larry thinks I'm "just ducky"(most of the time), it dressed like a little pilgram and that's my heritage, and I do a fair job personifying the quote from Michael Caine “Be like a duck. Calm on the surface, but always paddling like the dickens underneath.”

The two little dachshund pins are pretty self explanatory as are the blue ribbons with the pretend baked goods. At the last minute I threw in the Swiss army knife because I have a well known practical and handy streak. And the whole mess was mostly done with toys and set up on our Little Tikes castle which symbolizes the whole being a mom thing.

It's not the greatest picture, but in the end I did have fun setting it up.
Posted by Sarah at 11:56 PM