Artist of the Week: Rebecca Spring 2012 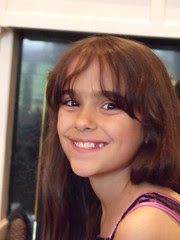 Rebecca, a photo by Teckelcar on Flickr.
This week's artist is the very lovely Rebecca. She looks so grown-up in this picture. I snapped it while she was next to me at the recital. The key thing with the picture was that I waited until after she preformed. I'm not sure I would have gotten as nice a smile if I tried before hand.

As for the performance itself, it went well. Rebecca originally planned on playing with the sheet music before her. However, her teacher approached her before the start of the recital and urged Rebecca to at least considering trying with out the sheet music.

When it was Rebecca's turn to play she strode up to the piano sans book. She was a bit hesitant at first, but as she progressed through the piece she grew more and more confident.Rebecca did a nice job and as you can she in the picture she was a very happy girl.