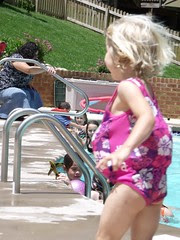 Whee, a photo by Teckelcar on Flickr.
This weeks challenge was to get moving, take a photo with motion blur.

I made sure to drag my camera to our last soccer game and I was completely unsuccessful in getting a blurred image in motion. I was only successful when I was at a pool party later that day and no longer trying to get any fancy dancy blurred shots.

Just as I pressed the shutter release this little blonde cutie flew by. I was initially irked, I was intent on getting a picture  of Rebecca with her teams in the pool. It was her teams end of season party that was graciously hosted by the family of one of the team members. However, after a moments reflection and checking the image in the camera I realized I had my blurred shot.

And the best part, this image is straight out of the camera. No editing, no cropping, just straight from the camera to the world.