Artist of the Week: Sheriffsaurus 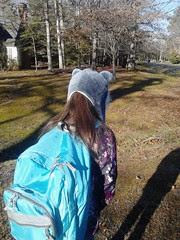 Rebecca, a photo by Teckelcar on Flickr.
Rebecca is this week's artist, but she doesn't want to be seen.

I asked to take her picture this morning at the bus stop, the sun was out and she was wearing her cute husky hat. I got one shot of her face with a rather petulant  expression and decided that was a no go. So instead, here she is from behind. At least you get to see the cute little ears.

Anyway, this isn't about cute hats it's about art. Specifically the creation of the aforementioned petulant husky.

At some point somebody brought home some modeling clay,  my guess is Rebecca since there was no great outrage over her use of their precious contraband. I'm not a big fan of the stuff since it inevitably gets ground into the carpet, smashed into the furniture, and most likely eaten by the dogs
.

Sheriffsaurus, a photo by Teckelcar on Flickr.
So yeah, modeling clay is tightly regulated when I buy it. That being said, I do recognize it is a great deal of fun. Particularly when it is used in an imaginative way.

Last week Rebecca decided that one of our dinosaurs was sorely in need of a job and a hat. Thus the sheriffsaurus was created. He has a cowboy hat, sheriff's star, handlebar mustache, and a beard. I thought the final result was outstanding. The whole idea is wonderful and the execution is perfect. We'll see how long he lasts.
Posted by Sarah at 11:58 PM