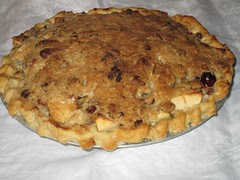 Apple Cranberry pecan pie, a photo by Teckelcar on Flickr.
Way back in the beginning of the month I detailed how I made an apple tartlet for myself from the scraps of another pie. I mentioned that I would write about the big pie I was baking that day at a later date. Well today is the day I tell y'all about my apple-pecan-cranberry pie.

The offical recipe name is Berkeley Apple-Pecan-Cranberry Crisp from the cookbook "An Apple Harvest Recipes and Orchard Lore" by Frank Browning and Sharon Silva. The Houston Chronicle published the recipe in 2011 with proper attribution so I'll send you there for the full run down, the second recipe down is the one you want.

Now of course I didn't just do the crisp as written, I had to modify it just a bit to suit my tastes. A proper crust is very important to me so I added one for the bottom. I used the remaining ball of crust I had stashed in the freezer from my French Apple Tart back in January. My other variance was to peel the apples. I'm not a fan of apple peels, so off they came. The rest of the crisp/pie was done as written.

Unfortunately I didn't get any pie, Larry brought it for a shiva call and I stayed at home to man the fort. The pie was a huge hit, not a crumb was left. As I recall Larry told me that more than one person raved about the pie.I guess I'll have to make it again so I can get a taste and see what I missed.
Posted by Sarah at 11:08 PM