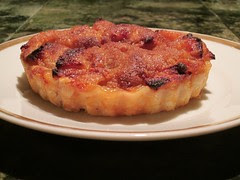 Mini apple tart, a photo by Teckelcar on Flickr.
I fully intended to make focaccia today for the whole Baking with Julia thing. I cracked open my cookbook, all ready to make bread, when my eye caught the line "This dough is mixed quickly in a heavy-duty mixer, allowed to rise, and then refrigerated for at least twenty-four hours, the time it needs to set that bubbly structure in place."

Whoopsie, I guess the focaccia isn't going to be baked today.

Which turned out for the best because I ended up making a quick apple cranberry pecan pie/crisp for Larry to take to a shiva call this evening. Thus bringing us to the mini apple tart.

I had a small amount of dough left after I trimmed the edges of the pie crust. I didn't want it to go to waste and since I wasn't going to get any pie, I decided to make a little tart for myself using one of my 4 inch tart pans.

Two apples were peeled, cored, and cut into small pieces. I tossed the apple chunks with a bit of brown sugar and squeezed on some lemon juice. The apple mixture was then packed into the waiting crust in the tart pan. For the topping I made a mixture of flour, brown sugar, ground ginger, and butter. I cut the butter into the dry ingredients and then sprinkled it on top of the apples. Into the oven at 350 and about half and hour later I had a luscious little tart.

Using just ginger was a nice change of pace. The pie I sent off with Larry had just ginger and I decided to give it a whirl.  Both the tart and the pie were very tasty, Larry told me the one he brought got rave reviews. I'll have to post about it another time.
Posted by Sarah at 11:09 PM