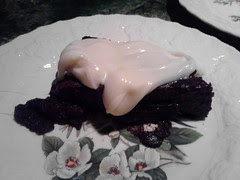 Feb 17, 2013 004, a photo by Teckelcar on Flickr.
This week's Baking with Julia challenge was Boca Negra. As always the full recipe is hosted on another site, this time it's A Frederick Food Garden.

It doesn't look like much, but this cake packs a wallop. a bourbon laced and chocolate flavored smack down on the taste-buds. And the cream, I could just rhapsodize about the white chocolate cream sauce all by itself.

For once I actually planned ahead. I made the white chocolate cream sauce (of awesome) a day before the main attraction. As I made it I had a little taste to see if I got the bourbon amount right. I have never been a big fan of bourbon, but I appreciate how alcohol can really kick up the flavor in cooking. The taste was electric. It took some serious effort on my part to put the spoon down and not just suck down the sauce in one go.

The next day, which just so happened to be Valentines day, I made the cake using the food processor method. I was able to bang it all together in under half an hour and then it was off to the oven in it's water bath. I had a slight water leakage problem with my springform pan, a bit of water collected on the surface of the cake. I remedied that by broiling the cake for a few minutes after the 30 minute cooking time. The offending spot quickly dried out and I had a luscious cake.

Flipping out the cake was not a problem and soon we were enjoying an incredibly moist and chocolatey cake that literally melted in your mouth. The white chocolate cream was utterly divine on top. Boca Negra is an amazing dessert and I will be repeating it sometime in the future.
Posted by Sarah at 11:47 PM

I like the photo of white chocolate cream slathered over the cake! This was so good!

It really is an amazing dessert! So glad we got to make it this week. And I can't wait to make it again. Next time though I will have to pick up some bourbon to try, I used grand marnier. It was excellent, but I am curious what bourbon is like in baking. Great job!

The cream was oh so very boozy, but oh so very addicting! I thought the two went together perfectly. Loved this.