Artist of the Week: Tessellations 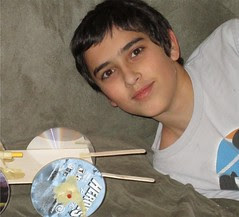 Nate, a photo by Teckelcar on Flickr.
This week's artist is Mr. Nate.

For once he wanted me to take his picture, quite a change from his normal camera adverse self. The reason for this change of heart is object that is in the picture. He is working on a self propelled car for school and at one point the teacher required a picture of the prototype to be brought to school. Mind you in the end he rejected my pictures and elected to take his own without my help.

An almost bit of wasted effort on my part. The one saving grace is that I now have a non-blurry picture of my middle boy. 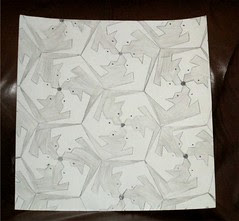 Tessellation, a photo by Teckelcar on Flickr.
Now about the tessellation, this site has a neat non-mathematical rundown on the subject (think Escher). Nate made his tessellation for his math class. I think it came out quite well, particularly since it was done at the last minute. Originally he did not color it in, but since he brought it to school that idea got changed. I think the pattern of white and gray is lovely and makes the picture easier to see and understand.

Currently Nate has it up on the wall in his room. I guess he is rather proud of it as well.