As y'all probably guessed we went on vacation. Part of the deal when we go away is that the dogs are kenneled. We found a nice kennel that is small with a staff that really loves dogs. The red boys love going and it's not a big deal.

For whatever reason Crunch didn't get his bordetella vaccination the last time he went in for his shots last June. I realized this 6 days before the dogs were due to be dropped off at the kennel. And there's the rub, the kennel requires at all dogs being bordered must be fully vaccinated at least one week before hand. The earliest I could get Crunch in for his shot was three days before he was to be dropped off.

Unfortunately bringing Crunch along wasn't an option. Our trip involved stays at three places, my in-laws' condo (pet free), my cousin's (numerous standard poodles) and my Mom's (one dachshund). There was also a ballgame at the Shea stadium. They would all let us bring (except Shea), but it would be hard on the old guy. He'll be 15 the end of next month and this particular trip would be a bit much.

Luckily I have an ace in the hole. Crunch's breeder, a fear friend of mine, lives in Culpepper, Va. One quick phone call later, Crunch was all set, they would be happy to take him. So the weekend before we left Mr. Crunch got driven up to Fredericksburg. Diane met me at Costco and we were all set. 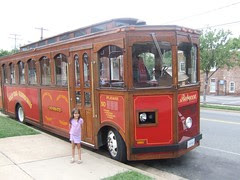 Rebecca Trolley
Originally uploaded by Teckelcar
Last Sunday we got home, but it wasn't until Tuesday that we could get Crunch home. Once again I drove up to Freddysburg and met Diane at the train station (she was picking up her daughter there). While we waited we walked to the visitor's center to us the public restrooms and got a little surprise.

We saw a bus/trolley parked on the side that was used for tours of the historic district, but that was not the surprise. As we walked by I noticed that the trolley had the name Rebecca written on the front. So of course I had to take a picture of the two Rebeccas together.

I think we need to go up again and maybe do a little site seeing with Rebecca.
Posted by Sarah at 11:55 PM