Thursday Three: End of an Era

Summer,at least for the younger members of the possum clan who got to go back to school this week, is over and the great Axis of Weevil Thursday Three springs to life.

Well maybe not springs, lurches forward for one last dying gasp is a little closer to the truth, because... Terry has up an gone and gotten a job that will actually make him work while at work. So without further ado

Except without the Nazis. Or singing. Or nuns. Okay, it's not at all like anything in the movie. SO SUE ME!! (Not really.)

Anyway, as you all know, The Axis of Weevil Thursday Three has been one of the more popular recurring features of Possumblog over the years, dating back to April 8, 2004. It has been on summer hiatus to allow it to be properly aired-out and disinfected, but when we sent it out, we had no idea that we'd be making our big exit before resuming production for the Exciting New Fall Season.

SO, in the spirit of the times, and to cap off the most drawn-out, insufferably melodramatic blogdeath sequences ever recorded, we herewith assault you one last time with The Completely Self-Centered Good-bye Edition of the Axis of Weevil Thursday Three! Since the original idea was posited by none other than Jim Smith, PhD, he has graciously written out the final question set for us.

As has always been both rule and custom, anyone may play along by either leaving a comment below, or by leaving a link to the answers on your own blog. Answer us now these things:

1. What was your favorite Possumblog post over the years? (With archive link, please, if you can find it.)

2. What will you miss most about Possumblog?

And, the exciting bonus question!

4. What will you not miss at all about Possumblog?

Hey I got plenty of singing today and I even saw a Nun in her habit, but this isn't about me. Well only the bits here are, otherwise it's all about Terry.

1)Favorite post, gee I didn't expect a test. I'm all ready pushing midnight so I'll cop out and say the ones about meeting and courting Reba, the bizarro soon to be ex-co-workers and the always exciting weekend wrap ups.

2)I'll miss the wonderful active community in the comments. I'm so glad I decided to join in.

3)My final words would be to Possumblog are It has been great while it lasted, I hope that Terry doesn't entirely let it die and you can never go wrong with ponies and ice cream.

And for the exciting bonus question, the bits about American Idol. My family doesn't watch it and we have no interest in it.

I don't know what I'll do on Thursday's now or who I'll get to photoshop.

So in honor of of the end of an era I'll end with a final photoshop of Terry. It's not the Sound of Music, but the outfit comes close. 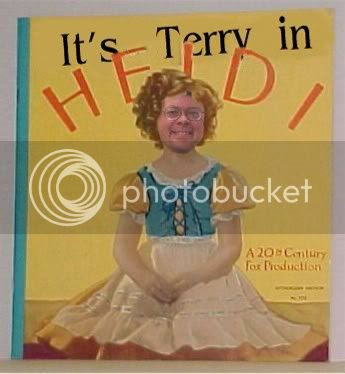