Artist of the Week: Lunacy 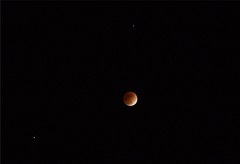 totality
Originally uploaded by Teckelcar
This week's artist is the Moon, with a little bit of help from the Earth and the Sun.

It was quite a struggle to watch the eclipse. Last night was a wondrously clear night with the moon filling the night with a bright silvery light. It was so bright that I thought I'd left a few lights on when I went up to bed. But tonight was another story. It was cloudy and a brief snow shower began along with the start of the eclipse.

The kids got to catch a brief glimpse of the start when a small break in the cloud cover appeared. Since the weather was uncooperative I then sent them off to bed. Once they were all tucked into bed, I set up the tripod out on the deck and was able to snag a few good shots when the clouds would lift and provide a quick peek at the show.

I'm really pleased with the above picture of the totality. I was able to get the surface of the moon with a fair amount of detail. There is a fair bit of light on the bottom, but contrast that with the next picture and you can see it is the full eclipse. 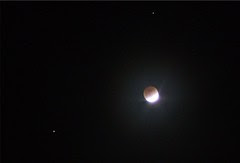 show's over
Originally uploaded by Teckelcar

In the second picture the brightness of the moon as it emerges from the shadow is incredible. I love the bit of light flair captured in the picture.

The clouds have thinned out a bit more, but the show is over.
Posted by Sarah at 11:58 PM

Labels: Artist of the week, photography