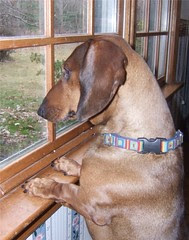 looking out
Originally uploaded by Teckelcar
I like Dachshunds because they are fairly intelligent and independent dogs.

Rally was brilliant and would regularly bamboozle Crunch and the occasional human. John is proving himself to be a fairly sharp as well.

When he is playing the chase game with Nate in the house (basically Nate careens around the central core of the house with John in hot pursuit), John has learned to stop and turn around in anticipation of Nate reappearing on the other side. He then leaps up and pounces on Nate.

This week John really outdid himself.

There has been some valentine's day candy left on bench. John ignored it until a few days ago. This in itself was remarkable since every other dachshund I've known would have hoovered it all up from the get go. When John did decide to eat the candy he would only take one piece a day.

It took me three days to realize what was happening. I would find a shredded wrapper left on the floor, in another room. Since it was one piece I thought a child had dropped it on the floor and John had nailed it.

Then a couple of days ago I saw John in action. He went up to the bench, carefully reared up and placed his forepaws on top, examined the candy, selected one piece and retreated to the other room to eat his prize.

I was stunned, I had never seen a dog exhibit such self control. In fact he was better than the kids. I told him to drop it, I took away the candy and then cleaned up the remainder on the bench.

It's almost like he figured out that if he was discrete and took only a little at a time it would not be noticed and he would be free to eat all the candy.

Good thing he's a sweetheart and doesn't have opposable thumbs. I think I need to channel this dog's mind and energy and get him started in obedience.
Posted by Sarah at 11:58 PM