Senate Committee
Originally uploaded by Teckelcar
Today I exercised my right as Virginia citizen and hied myself on over to Richmond to voice my opinion on a bill.

The bill in question, HB538, concerns commercial dog breeding. It is basically being touted as the anti-puppy mill law.

So as an ethical member of the dog showing fancy I should be for it, right? 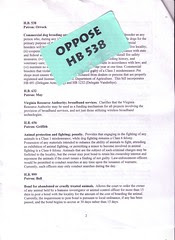 538
Originally uploaded by Teckelcar
Wrong, it is just the first step in limiting dog breeding in Virginia. However my biggest objection is that it is a classic knee jerk reaction to a recent horrific situation at a puppy mill. So a new bill was written and put before the house. Originally written it specified that state and federal guidelines for animal care must be met (a 60 page document). The federal provision was struck, but the bill still remains an unfunded mandate for the counties. Counties that are already strapped for funds and are not able to enforce the laws already in existence. The same laws, mind you, that are more than sufficient to shut down any breeder that does not maintain their animals and/or kennel.

If HB538 passes and goes into law ethical commercial breeders will be stuck with an onerous law that will very well force them out of Virginia. I do not care for commercial kennels, but the good ones have clean facilities with healthy and well cared for dogs. When they pull out where will the pet stores get their puppies? From out of state kennels. Some of this kennels might be well run, but I'm sure a few will not. Puppies will be shipped long distances at a very young age to fulfill the needs of the pet stores. I hate pet stores, they are some of the worst places to buy a dog. But they exist, that is reality.

Meanwhile the seamy underside of commercial kennels, the puppy mills, will just move underground. They will no longer inoculate against rabies to avoid the "gotcha rabies database," they will no longer get kennel licenses and will avoid the vet. The dogs will most likely end up in crude shelters hidden off the beaten path, thus making their horrible existence even harder to find. These puppies will be sold in flea markets and in parking lots. They will be cheap to buy, but expensive to own. I won't be surprised if a few end up rabid and infect their new owners.

Virgina doesn't need this new law, it needs to enforce the ones it already has.
Posted by Sarah at 11:59 PM