Artist of the Week: Snowman 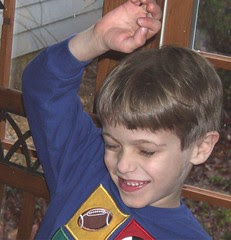 Max
Originally uploaded by Teckelcar
This week's artist is Max and you can see he is in fine fettle after his short stint in the hospital.

If fact his stay was so short it was deemed by the nurses to be the shortest CF "tune-up" they have ever seen. Well he is a speedy child.

Anyway before our adventures in health care Max made a paper snowman for school. A white paper snowman blank was sent home with the instructions stating that the child has to create his or her own snowman anyway they like with the only restriction being that no food items can be incorporated into the design. Which struck me as fair enough, the snowmen will be up on the classroom wall and the school does not need any vermin attractants. 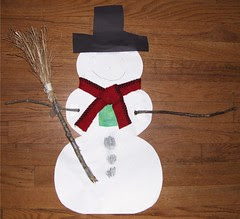 snowman
Originally uploaded by Teckelcar
Max immediately wanted to get started when he first brought it home, but I wasn't and told him we would do it later. Of course I totally forgot about it until the day it was due. So that night night we got cracking. He wanted to make a very traditional snowman from the black top hat to the broom held in the stick arms.

Max cut out the hat from some construction paper we have in the house and fetched the sticks from the great outdoors. The broom was a bit trickier, I didn't want to buy one. Then I had the great idea that I could make one. Max got yet another stick and we both collected dried grass from the woods for the bristles. A little glue and a piece of string and we had one mighty fine broom. Max drew the face (there is even some hair peeking pout from under the hat) and the buttons. Then glued on the arms, the hat, the mysterious green square (even he doesn't remember why he did it) and used both glue and tape to attach the broom. The scarf was a last minute addition. I had him sort through my sewing scraps and he picked out the red flannel. I cut off along the edge with the contrasting binding and tied it onto the snowman and tacked it down with a spot of glue.

I think it's rather cute. The eyes and nose are a bit hard to see, Max can be a bit of a minimalist in his drawings, but it's all there.
Posted by Sarah at 11:55 PM