Artist of the Week: Map 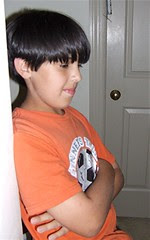 Jake
Originally uploaded by Teckelcar
Jake is this week's artist.

He is very much like his father in his love of maps. Larry is slowly collecting vintage maps of where our ancestors originated. So far his family is covered, now we just need to find a reasonably sized and priced one of the UK. (I'm English, Scottish and Welsh- my 6 months studying abroad in England was a bit of a home coming for me, I really blended in. That is until I opened my mouth and spoke.) In fact we all love maps. I am amazed whenever I encounter someone who can't read a map, it is so natural and easy for us.

He made this map just over a week ago. I don't know what inspired him, but I do know that I like it. 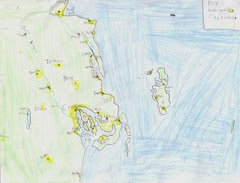 map
Originally uploaded by Teckelcar
He has carefully included a key (which he almost always does) and noted the city centers and the surrounding urban areas. I like the rugged coastline and the logical placement of the urban areas. Ports and rivers are classic locations for cities. The ready access provided by water to other areas is a sensible place for the first colonists. And from there the populations can move outwards.

It'll be interesting to see what Jake does later in life. He has an interest in architecture which produces maps of a different sort.
Posted by Sarah at 11:54 PM