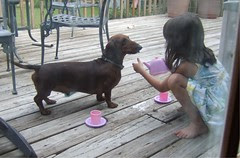 tea with Dell 1
Originally uploaded by Teckelcar
Dell has really blossomed in our home. He loves being a house dog and having four children to follow around.

Most of the time I'll find him on the floor rolling around with Nate, but Dell also enjoys tea parties with Rebecca. Yes, that's right, Mr. Dell is an aficionado of tea time.

Rebecca goes out on the deck with her little tea set and offers Dell Tea. He is fairly polite and almost never knocks over his tea. If you click on the picture it will lead you to a whole set of photo's from Rebecca's last tea party. Mostly it just Rebecca with Dell, the rest of the crew is uninterested, but John did put in appearance at the end.

We really did hit the jackpot with our dogs, but then again I wouldn't expect anything less from Crunch's puppies.
Posted by Sarah at 11:08 PM