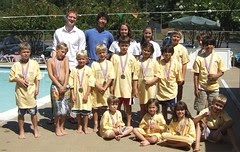 tennis
Originally uploaded by Teckelcar
Today was the big end of Tennis party, awards, medallions and t-shirts were handed out. And of course no party is complete without these.

The kids had a great time. Nate was the accidental winner of the 10 and under age group. It was accidental because one of the coaches put him in with the younger kids, he should have been with the older group (at nine years old he belongs there, but he plays at the older age group level). Oh well, he earned a trophy and next year we'll be sure he plays up a level.

Meanwhile Jake and Rebecca were the runners up in the doubles competition. It turns out they are a very good team . It'll be exciting to see what happens next year. 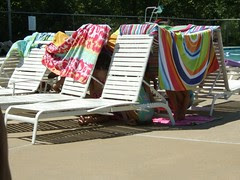 fort
Originally uploaded by Teckelcar
After the pizza and cupcakes all the kids started messing about the pool. Some had a mini-Olympics in swimming, others splashed about and a few went to the play ground next to the pool . Then they all decided to make a fort. Chaise lounges were pull in to place and towels were carefully draped about. If you click on the photo you'll get a few more shots of the fort.

We were down by the pool for several hours. Max grew restive and after putting him off we left as the other families started to pack up. It was a nice end to a fun tennis season.
Posted by Sarah at 11:57 PM