Artist of the Week: Spring 2011 Recital 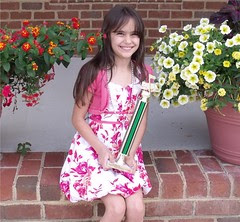 Rebecca, a photo by Teckelcar on Flickr.
This week's artist is rather belatedly awarded to Rebecca.

Way back in the beginning of June Rebecca had her spring piano recital. She played Painted Rocking Horse as a duet with her piano teacher, it's a pretty little tune that Rebecca enjoys playing. For weeks she had been practicing diligently and it showed, Rebecca did a lovely job and was pretty darn cute to boot.

At the end of the recital the students were awarded certificates for performing in the recital and trophies for the individual judging conducted earlier were handed out as well. This year Rebecca decided to go for the large trophy. There are three types: small, medium, and large and they are awarded according to how many pieces are memorized and played for the judge. As I said, Rebecca decided to go for the large trophy which translated into 10 pieces of music. As you can she in the picture she was successful and very proud of her achievement (And yes, the judge can fail you all or in part. You can get down graded in trophy size or wash out entirely. It doesn't happen very often, just enough to to remind the students to practice.)

And here it is, Rebecca's performance during the recital.