MCP Project 52: A Letter of the Alphabet 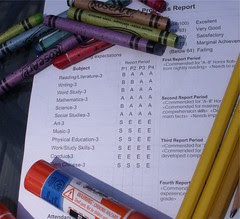 Straight A, a photo by Teckelcar on Flickr.
This weeks theme was "A Letter of the Alphabet."

I t had me stumped for quite some time. I considered taking pictures of signs around the area and cobbling together a collage of a particular letter (C came to mind). However the idea never really grabbed me. So I thought some more when I suddenly got a thunderbolt. I could do something with a report card.

It would be unique since school had ended weeks and weeks ago, I had three to chose from that had straight As, and I could make a nice still life with the excess school supplies floating around the house.

I'm pretty happy with the final result. I picked the best looking report card of the bunch to maximize the amount of As featured. And hey it's a nice way to brag on my children.
Posted by Sarah at 11:58 PM