Well This Was Unexpected 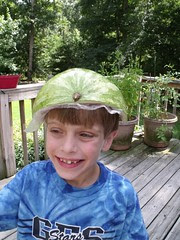 Chapeaux, a photo by Teckelcar on Flickr.
So I have this lovely watermelon that I cut up today. It's juicy, sweet, and oh so delicious. The perfect treat for a summer's day, hence the whole "Sweet Relief" in the previous post.

About a quarter of it got sliced up to be eaten on the spot, the rest I cut up into small bite sized chunks to be eaten later. AS I was cleaning up afterwards Max noticed the remaining bit of rind on the counter, left over from when I cut up the chunks. He declared the rind to be a perfect hat and wanted to try it on. He then added that if it was too small we could mail it to a friend in Germany who is a bit younger than Max.

Aside from the impossibility of shipping watermelon rinds to Germany ( a very generous idea that would never fly with the post office), the hat thing knocked me for a loop.

This is Max, my little Adrian Monk in training who takes forever to wash his hands, and he wants to wear a melon rind on his head.

So I did what any mother would do. Rinsed it off, put some plastic wrap on the inside (because eww, melon juice on the hair), and plopped it on his head. 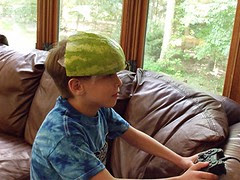 Melon Gaming, a photo by Teckelcar on Flickr.
And darn it, he made it look good.

The stripes on the rind worked well with his tied dyed t-shirt. He happily modeled his new hat and was amiable to the ensuing picture taking.

And what does one do when wearing a watermelon rind hat?

Why play video games of course!

He spent about a half an hour with it perched on his head. After a while it got a bit heavy and the novelty wore off. His only complaint was that he wished it was half a rind instead of a quarter. According to Max that would make a better hat.
Posted by Sarah at 11:25 PM