Monkey on His Back 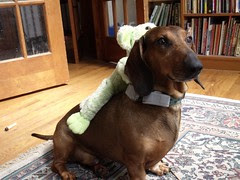 Monkey on his back, a photo by Teckelcar on Flickr.
Nate has a green monkey that lately we have been throwing at each other. I don't remember how he acquired it, but it has been left downstairs for the past week. So far the dogs haven't touched it, that said the monkey's days are probably numbered.

Anyhoo we were discussing how it was cruel to dress up animals in absurd offits. Nate pointed out that I was always putting on hats on John and replied that John didn't seem to mind and I never forced the issue. Once he pawed it off it was over. Nate was then seized with the idea of putting the monkey on John's back.

Poor John, he is such a good sport. I think Dell would lasted maybe five seconds.
Posted by Sarah at 11:58 PM