Artist of the Week: Book 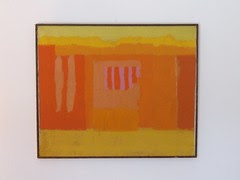 Jail in the Desert, a photo by Teckelcar on Flickr.
This week's artist is my Uncle Hector. I've featured him before when he had a show way back in June of 2006. This time, however I'm focusing on this older body of work.

Last Christmas I was told by my mother a book was in the works concerning Hector's oeuvre. She had been requested to take photographs of any piece she had by Hector. Since they had been friends since college, my mother had some of his earliest works. My job was to take these photos and send them in. I happily did my mother's biding. I ended up taking down most of the pictures and moving them to a sunny room. I had no tripod, insufficient light, and a camera not quite up to snuff for the sort of precision in color I needed. So pictures weren't the best, but they were good enough for Hector to get an idea of what my mother has, though I was slow in sending them off.

Anyhoo, I got word this week on which paintings were wanted for the book. All that was left to do was find a photographer experienced in taking accurate pictures of paintings. It was suggested that I look towards local colleges and work from there.

And that is what has been keeping me busy this week. Dartmouth is near my mother and it has a decent art department. However they seem more focused on sculpture and painting and not so much on photography. I then got the great idea to check out the Hood Museum of Art. The college has been collecting art since 1772 and I figured that they most know of a photographer tat would fill the bill.

It turns out that was a good idea and I just may have found the right person for the job.

As for the selected paintings, the orange one featured here made the cut. It is my mother's favorite and was named by my parents "Jail.in the Desert."