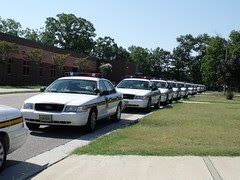 Police lineup, a photo by Teckelcar on Flickr.
Last week, can it really be just last week, I was sitting outside during band camp. My job was to keep an eye out for kids suffering from heat exhaustion and to help them out. Which considering the mild weather was a pretty easy task.

Anyhoo, at about 10:30 am a couple of police cruisers pulled up in front of the school in the drive between the parking lot where we were stationed on and the high school. A curious event considering that school wasn't due to be in session until after Labor day. The mystery deepened when more cruisers pulled into the drive. It was a bit disconcerting to see such a strong police presence.

However our concern turned to amusement when the cars started to number in the double digits. At one point I counted 17 police cars. The whole situation was so absurd I had to take a picture. I couldn't get all of the cars in the frame, but what I did get was pretty impressive.

As to why they were there, the police department had scheduled some sort of drill at the high school. We got to see all the cops file into the building and come out a short while later.

But I like to think it was a show of force to help keep the marching and in line.
Posted by Sarah at 11:53 PM