Cloudy With a Chance of Cough 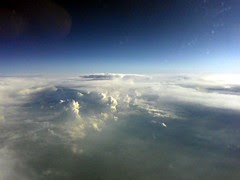 above the clouds, a photo by Teckelcar on Flickr.
This is how my head feels.

It's not completely stuffed, but it is cloudy in there.

I went to Chicago this weekend with Larry for a wedding. The Groom was a friend of Larry's from Grad school and Larry was in the wedding party. Which meant we got fabulously fed all weekend long. We also met up a college friend and his family (they too have four kids that we finally got to meet in person) and a friend of mine from high school. The only meal we paid for was a quick bite to eat at the airport while we experienced a presidential delay.

Air Force One, a photo by Teckelcar on Flickr.
The President was in Richmond and the airport got locked down before our flight was scheduled to appear. While the commander in chief was being driven to the airport, boarding Air Force One (which I might state is huge in person. I know it's a 747, but dang all that for one man), and jetting away; no planes were allowed to land or takeoff. As a result our poor plane had to refuel in Norfolk before landing in Richmond. So we had a one hour delay because of the whole presidential visit. We had a direct flight, but quite a few peopled missed their connections. Unfortunately I forgot to bring a camera, but I was able to get a few pictures with my cell phone.

So except for that (and my stupid cold from traveling in airplanes), we had a wonderful time.
Posted by Sarah at 11:07 PM