MCP Project 52: The Eyes Have It 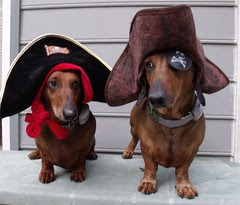 Keepin' a eye out, a photo by Teckelcar on Flickr.
I swear this is the last pirate themed picture until at least Halloween.

The theme this past week for MCP Project 52 was "The Eyes Have It" and the red boys have such expressive eyes in this picture. John has a wary eye and Dell seems to be looking towards John for support, a fairly accurate portrayal of the two.

I had not particular ideas in mind for this week's theme, I basically fell into it. I was going through the pictures I took of the dogs in honor of "Talk Like a Pirate Day" when I realized I had a good picture for MCP Project 52.

As a result I submitted early on in the week. Of course, as though to balance things out, I forgot to write up the picture on Friday. Either way this was the selected picture and I think it's a hoot.
Posted by Sarah at 10:55 PM