What Happened on Tuesday 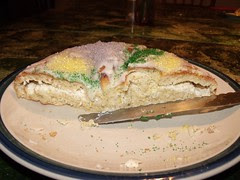 King Cake, a photo by Teckelcar on Flickr.
For whatever reason I got into the spirit of Fat Tuesday and decided I should make a King Cake. I don't know why I got this notion, but after a bit of searching on the internets I found a likely candidate over at Gourmet Girl. I wasn't in the mood for the more traditional cinnamon type of cake, cream cheese filling was what I wanted. Mind you I have only had King Cake once before and that was about 16 years ago when I was in Louisiana for a field trial. So I'm far from an expert and this is uncharted territory for me. The recipe seemed to be fairly straight forward and I was willing to give it a shot.

It all came together very easily. I had most of the ingredients on hand, the exceptions being the colored sugars. Purple was impossible to find so I had to make my own with a few drops each of blue and red food coloring. The only modification I made was to the icing. I tasted it as I was mixing it up and thought it tasted to strongly of raw sugar. I made an impromptu double boiler with the bowl and a pot of boiling water and threw in a tablespoon or so of butter (everything is better with butter). After 10 minutes it tasted much better and was a breeze to drizzle onto the cooled cake. I sprinkled on the sugars and I was very pleased with the end result. As for taste, it was scrumptious! The lemon was a nice counterpoint to the sugar and the cream cheese. This one is a keeper. 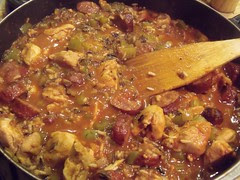 Jambalaya, a photo by Teckelcar on Flickr.
Now I couldn't just have King Cake and I decided if I was in for a penny I should be in for a pound. I have always wanted to make jambalaya and this would be as good a time as any. I always thought jambalaya smelled wonderful, but each time I was offered some shrimp/crayfish/prawns were involved and I am horribly allergic to them. S back to the internet, I decided to make one with chicken and andouille sausage.

The jambalaya was little harder to make than the cake. I found the sausage right off the bat, but the seasonings were much harder to come by. In fact I never did find the file powder. Rebecca was a bit concerned about my skipping an ingredient, but I explained to her that this was spicy enough and we wouldn't miss it. Which brings me to the other modifications I made. I like some heat, but I could tell this would blow my socks off. I decided to half the amount of red pepper flakes and entirely omitted the hot sauce. Larry loves spicy food so I gave him the hot sauce on the side. As for the peanut oil, I switched it over to olive because Rebecca and I seem to have a minor peanut allergy.

Turns out toning down the spices was a very good idea. It was at the upper range of what I can tolerate and was beyond Max and Rebecca, Jake was basically okay with it as was Nate, and Larry happily poured on the hot sauce. It was very tasty, smelled wonderful, and will definitely be repeated.

The cake looks wonderful! Never thought of cream cheese for a filling.

I skipped the file powder in the gumbo (Penzey's carries it, and is just down the block, but I was grocery store-d out at that point) - big mistake, as it was the main thickening ingredient.

If I can figure out how to successfully make a half batch, jambalaya is going to be on the regular rotation here as well.