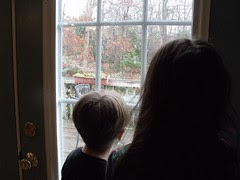 watching, a photo by Teckelcar on Flickr.
The news for the past few days have been filled with reports about a potential snow event starting today. We have been looking at snow maps and getting cautiously excited. Maybe, just maybe, we will have a real winter after all.

It started clouding up last night and this morning it smelt like snow was on it's way. For non-Northerners the air has a particular cool, crisp smell about it before it snows. I really can't describe it. I just know it when I smell it. Then some point after lunch it started. Max and Rebecca were transfixed by the sight of little misshapen clumps of snow fell outside. 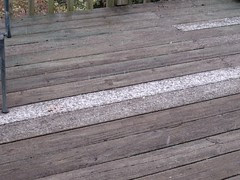 For quite sometime nothing was sticking. It was still in the upper 30's and the ground was too warm for the snow to accumulate. As the temperature dropped magic started to happen. The snow first started to stick on the deck, but only on a select few boards.Meryl said those were the cool ones. It was an odd sight, the stark white stripes surrounded by soggy grey.

The flakes were still lumpy and not at all the beautiful and refined crystals of colder weather. And yet, it is still snow and that is all the matters. 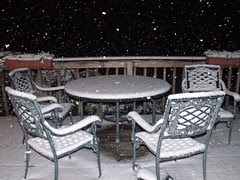 2 inches, a photo by Teckelcar on Flickr.
By eight o' clock the deck and yard were covered in a soft blanket of snow. I tromped out and got a measurement of two inches! It is wonderful packing snow and I sent the whole crew out to play.  Since tomorrow is a holiday Nate has a friend staying over and he joined in the fun with borrowed boots and gloves. Even John joined in on the fun, having a marvelous time romping in the snow. Dell elected to stay indoors and made it very clear that he did not want to join his brother. I think they all spent a good hour outside and thoroughly churned up the yard. By then the snow was measuring 3 inches and still coming down.

When I last checked at 10:30 the total was at four and still accumulating. I've always said we get our winter in February.
Posted by Sarah at 9:24 PM