Artist of the Week: Illuminated Dream 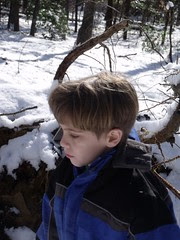 Max, a photo by Teckelcar on Flickr.
This week's artist is Max. I got this picture of him Monday, the day after our big snow storm. We got about 4 1/2 inches and it was all pretty much gone Tuesday afternoon. Tonight's rain pretty much guarantees that not a speck will be left Thursday.

Anyhoo I have learned to immediately send children outside after  any sort of snowfall. Heck I even sent them out Sunday night at around 8:30. There was about 3 inches of perfect packing snow and it would have been a shame for them to miss and opportunity to play in good snow. They spent an hour in the yard having a terrific snowball fight and completely churning up all the snow on the ground. In the morning it was a bit crusty, but by midday the snow had softened up again. The battle was resumed, this time in the woods where the snow was in better condition. Everybody had wet boots, coats, and gloves by the time they were done. It was a big mess, but I'm glad we finally got winter. We had pretty much given up, so this was a nice surprise. 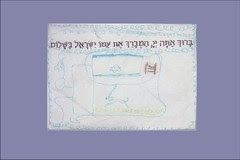 illuminated dream, a photo by Teckelcar on Flickr.
Now the art was not a surprise. It was a Sunday school project and I was there to help. The project was to create an illuminated text using tracing paper and a construction paper frame. I ended up doing the lettering for the prayer because Max was getting very frustrated. Hebrew is written (and read!) right to left and Max kept smearing the letters. After about four tries I offered to do the writing. The rest of the illustration is all Max's doing.

He created the abstract design and traced the figure of the dog from an example of medieval illuminated text that was put out for inspiration. Max decided that the dog was thinking about Israel and the torah  as it ran across a field. I think it's an utterly charming creation and had fun working with Max.
Posted by Sarah at 11:54 PM