Artist of the Week: Science Fair, A Bridge too Many 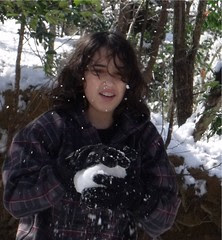 Nate, a photo by Teckelcar on Flickr.
This week's artist is Nate, caught here in a snowball fight with his co-conspirator.

Nate decided this year to team up with his very good friend N for the science project. Which was good and bad. The two of them were able to get things done with little or no nagging from their respective parents, BUT it meant quite a bit of chauffeuring them back and forth at 20 minutes per one way. I joke about us being in the boonies, but N's family has us beat by many, many miles. Fortunately they are considerate boys and scheduled their times together wisely. Hence N sleeping over the night of the big snow storm. It was a Sunday night, but it was a school holiday on Monday and N's parents could swing by when doing something else with N's big brother. 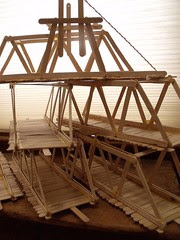 bridges, a photo by Teckelcar on Flickr.
Anyhoodle, they had to finish building their 15 (!) bridges and then destroy them. Originally it was going to be 25 bridges, but sanity returned and they decided that three bridge types  (flat, trestle, and suspension) was more than enough. For a month they had been chipping away, first making the 15 bases, essentially the flat bridges, and designing the the other two.

For the final assembly Nate wanted me to buy a boatload of small clamps. Being the queen of improvisation I said no and instead pulled out some 1 inch binder clips. I would be happy to buy those in bulk, particularly since 1 clamp costs as much as a dozen binder clips. As the glue dried the boys stacked the bridges, it got to be a fairly impressive sight.

Then it was time to have fun. The boys, again, wanted me to go out a buy materials. This time it would be weights for the bridge busting. The weather was getting serious at this point with the snow and again I demurred. I told them to use a bucket and water. They didn't think it would work, that is until they picked up the 5 gallon bucket and realized just how heavy water is. I sent then out to the driveway with the bucket, some rope, a large measuring cup, and two sawhorses. They had a great time and got some good data. 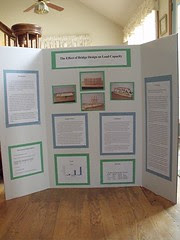 As the snow continued to blow they knocked off before the suspension bridges. A few of those still needed to dry and it was getting unpleasant out in the driveway. In the morning they were all set to bust their remaining bridges when I asked an important question, did they photograph the bridges?

Luckily they had an extra flat bridge and they were able to cobble together another suspension bridge. I was able to get some nice pictures of all three bridge types plus the underside. Then it was back to breaking bridges.

N did the data analysis and Nate wrote up the experiment. It really was a joint effort. So often one kid does the bulk of the work, but these do fairly split the tasks. I helped out with the poster board by trimming up the printouts and gluing them together. For whatever reason Nate never seems to be able to glue things down, everything always drops off the next day. The whole mess got turned in last week and it'll be a while until we know what happens. They made some lovely bridges, and did a good job with the write-up.