Artist of the Week: Minecraft 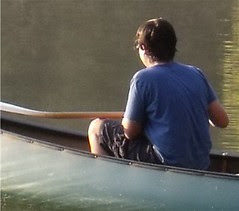 Jake, a photo by Teckelcar on Flickr.
This week's artist is the now camera shy Jake.

He really does not want anybody taking his picture now so I have to settle on a back view from way back in August. The more recent pictures I have are from band performances and I have already featured them. He'll eventually come around, I just have to give him his space. He is very much 15.

Anyhoodle I'm featuring him for what he has done on Minecraft. For those not in the know, Minecraft is a video game where you create everything from different textured cubes, for a better run down click here. It looks very interesting and Nate very much wants me to play, but I have demurred so far because I can see it can become a very big time sink. Case in point Jake.

He is currently the mayor of a town on one of the servers. Along with a few other co-mayors, he shapes how the town grows. He has his own buildings and has created some wonderful structures, one of which is a Spleef stadium (Spleef is a game within the game).  Jake has created a neat little world and I wish I could show it you.