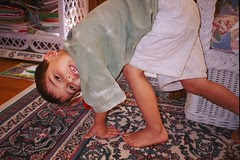 Copy of tumble_Nate, a photo by Teckelcar on Flickr.
This is Nate from well over a decade ago and he is still the same silly boy that is almost always in motion. He is almost my height now, it looks like he is just 2 inches shorter than me. that difference, however is not going to last. I swear he has grown a few inches in the past few weeks.

As for his birthday, he didn't get the day off even though it is Veterans' Day. He did, however, get to have a couple of his favorite foods. His request for his birthday treat was cinnamon rolls. He is not a big fan of cake, coffee cake is more his speed. 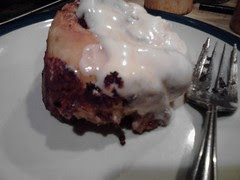 cinnamon roll, a photo by Teckelcar on Flickr.
He was willing to have me buy him a coffee cake, but I wouldn't hear of it. Dang it, I have made them before and I can certainly make them for my son's birthday. It just meant I had to have them all set to go in the oven before I went to bed and set the oven's time to preheat it so I could pop the rolls in a 5:30 am.

Nate was very pleased with his birthday treat and I think the smell of the cinnamon rolls made everyone wake up a little easier this morning.
Posted by Sarah at 11:56 PM