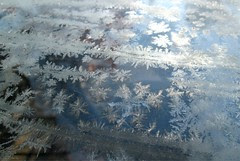 Frosty Morning, a photo by Teckelcar on Flickr.
We have had some very frosty mornings the past couple of days, as evidenced by the traceries of frost on the glass tabletop out on the deck. The sudden and rather early plunge in the temperature has caught out a few people in the neighborhood.

The backflow piping for sprinkler systems jut up into the cold air and those that hadn't winterized their systems yet swaddle them up at night to prevent freezing. Then they are forced into running their sprinklers in the predawn hours to keep the water moving. My neighbor was one such vicyom, which surprisd me since he is very handy about the house and fixes his own cars. It turned out he called his guy to winterize their system four weeks ago and they just got around to blowing out all the water today. i wouldn't be surprised if they hire someone else next year.
Meanwhile I'm happy that I never did fire up the lawn sprinklers this year. It was such a wet spring and summer I did not see the point of wasting water and money. As a result,I was already winterized. Being cheap sometimes pays off.
Posted by Sarah at 9:25 PM