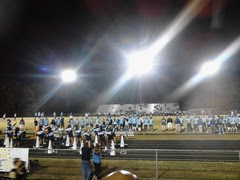 Under the Lights, a photo by Teckelcar on Flickr.
For the first time ever I went to a high school football game. Though in reality I was just there for the band.

it's Jacob's senior year and I realized that if I was ever going to go to a game I should get off my duff and actually go to one. It was the penultimate regular season game with nothing particularly special about it. My in-laws were in town and we decided it would be fun to go to the game. We would watch the first half of the game, the band's halftime show, and then head on back home.

It was a beautiful night for football, the weather mild with the rain holding off until after halftime and even then it was just a fine mist. I had fun chatting with Larry's mom and not watching the game (It was expected to be a rout and our high school did not disappoint, only one touch down by the visitors). I alsogot a kick out of the warm reception I got from the band members as I walked past. They are a nice bunch of kids and I'm glad my son is one of their number.
Posted by Sarah at 10:29 PM