Artist of the Week: What Goes Up 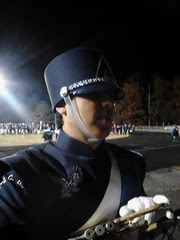 Jacob, a photo by Teckelcar on Flickr.
I've been slacking off on the whole Artist of the Week thing Mostly because I have been wanting to feature Jacob and his band, but also due to the intense competition for my computer between yself, Max, and Rebecca. Silly middle schoolers with all their computer based homework.

Anyhoodle, this week's artist is Jacob in his final year of high school marching band.

I took this picture of him at the start of the football team's penultimate regular season game. His grandparents were visiting just to see him march and I was in attendance for my first ever high school football game. It was a beautiful night for football, the weather was clear and mild, much nicer than you would expect for November. We had a grand time and left after the halftime show since we were only there for the band. 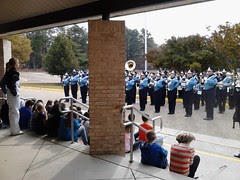 Recruitment, a photo by Teckelcar on Flickr.
The previous day I had gone out with the band for a recruitment drive. The idea was to visit several feeder schools, one elementary and two middle, and drum up some excitement for band. All of the students we met were polite, but the elementary kids pictured here were the most receptive. They asked plenty of questions and begged for the band to play a few more songs. Hopefully a few more kids will get turned on to music.

And now for the music, I never did get a proper video of this year's show "What Goes Up." The best I have is of a semi dress rehearsal (they have the be-plumed hats on) with the addition of a pickup truck that was not moved in time. The music was a bit flat, it was pretty darn cold with a wicked wind, but they did do a good job coping with the rogue vehicle.