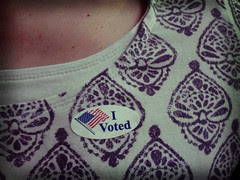 Done, a photo by Teckelcar on Flickr.
I voted today, sometime around 10:30 am. I like to avoid the morning rush, but still have the rest of my day. After I fed my ballot into the scanner I found out I was voter # 819 for my district, a pretty good turnout for fairly early in the day. The best part was as I walked out of polling place with the knowledge I was done with this very ugly election cycle. The two major candidates were awful, as I explained to a friend it was as though the barrel was emptied. And they were scraped out from the bottom. In fact The Richmond Times Dispatch refused to endorse any of the candidates, a pretty shocking state of affairs.

I'm just glad it's over along with all the political phone calls that have been tying up our phones.
Posted by Sarah at 11:43 PM