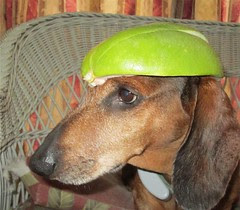 Pomelo head, a photo by Teckelcar on Flickr.
John is a very patient dog.

He was less than thrilled with my instance of a pomelo rind hat, but he tolerated it long enough for a few pictures. Which was far better than than his brother.

Dell, who believes that things are divided into two categories: food and potential food, was far more interested in eating the rind than wearing it. I should have recorded his attempts at grabbing the rind with his jaws every time I brought it near his head, it was hilarious.
Posted by Sarah at 11:54 PM

His list of grievances against Mom is growing apace. There may be a reckoning soon...

I think the turkey neck on Thanksgiving more than makes up for the hat.