Artist of the Week: Cards 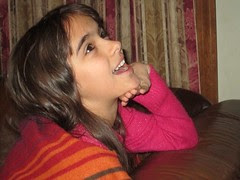 Rebecca, a photo by Teckelcar on Flickr.
This week's artist is the irrepressible Rebecca.

She at first did not want me to post this picture, but after I gave her a choice of photos she decided it was a decent picture. I really like it, the picture captures her silly, dramatic side. She can be a real hoot to be around such as today, I took the picture while she was playing a video game and the running commentary was hilarious. The both of us like to create avatars that look nice and she bemoans the fact that she can't change things after she starts playing, then she goes and defeats the dragon. My feral princess in action. 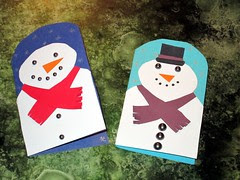 Cards, a photo by Teckelcar on Flickr.
When she is not busy slaying dragons she like to create things. This week's art took the form of a couple of cards she made in school. They cute little snowmen made from paper and glue on beads. She had made a third one, but messed it up and turned it into a gift tag. the tag is not pictured because we used it on one of Nana's presents. The cards are very well made, all neatly glued in place and no ragged edges. I'm glad we ere able to use the tag for someone who would appreciate Rebecca's effort. I'm not sure what she plans to do with the cards, but whoever does get them will be very lucky.
Posted by Sarah at 10:06 PM