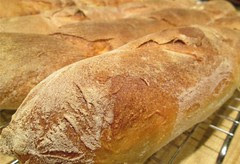 Proper French Bread, a photo by Teckelcar on Flickr.
I have pretty much fallen off the wagon in regards to the Baking with Julia stuff, but it did get me to buy and use a wonderful cookbook. So instead of sticking to the schedule I will continue on in my own way and maybe some day get back on track.

Which brings me to the lovely bread pictured here. On New Years I decided to bake a brie, but the big question was what to serve with the cheese. I asked Larry what he would like and he said French bread. Which is a bit of a challenge since I have yet to have found an easily accessible loaf of good French bread in the area. So I decide to make it myself, how hard could it be?
Well it turns out it isn't particularly hard, but it is very labor intensive.
I had to first make pizza dough for a 1/2 once of starter. From there I had at least 3 different rises, an in the fridge rest, and a steam filled oven. The end result was very good, precious little of the four loves made to the new year, just a four inch stub that Nate devoured the next day. A good crust, chewy bread, a faint sour tang, and a lovely open structure. The bread was a roaring sucess and it was the first time I had ever baked French bread. I think I will do it again, but really it took a good 24 hours to make it. What is it with French and their complicated bread products.
Posted by Sarah at 11:45 PM