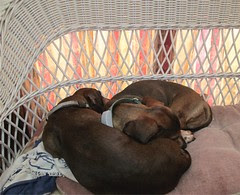 Snuggle, a photo by Teckelcar on Flickr.
It has been very cold around here lately, dropping occasionally down to the single digits at night. Which is shockingly cold for the average Richmonder and darn cold for those of us from more northern climes.

I think the red boys have the right idea. They like to snuggle up with each other when they are not on crumb patrol. They are silly dogs, but they are not stupid dogs. John and Dell  have even figured out it is better to duck under the deck to avoid the wind when they are forced outside to do their business.

Oh and as to school, there indeed was school today with only a two hour delay. The slightly warmer temperatures helped clear off the roads, just in time for next week's storm.
Posted by Sarah at 11:57 PM

Happiness is a warm puppy, indeed. W actually got up in the high teens or so with no wind yesterday. Everyone decided they'd had enough of being cooped up and decided to do all the errands and socializing they'g skipped during the vortexes. That's the only reason I can come up with for the horrific traffic on the way home from work yesterday.