Artist of the Week: Elephant 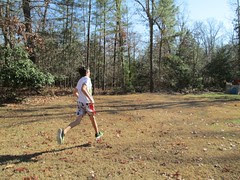 Nate, a photo by Teckelcar on Flickr.
Nate, the boy who seems to be always in motion, is this week's artist.

Rebecca took this picture of him on Thanksgiving day and it is a classic shot of Nate. He does like having his picture taken and actively avoids the camera. I only get a limited time frame to take the annual picture of him and his siblings. After about 15, 20 minutes he is itching to go. I have to work fast and be aware of how the mood is. Once I think I have my shot they all scatter to the four winds (dogs included). 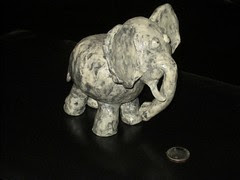 Elephant, a photo by Teckelcar on Flickr.
As for the artwork in question, Nate made this in middle school at the same time he made his battleship box. I kept meaning to post this, but it just never happened until now.

Anyhoodle, it is a very nice clap sculpture of an elephant. I included a quarter in the picture for scale. It is a nice solid piece that makes happy when I see it. Sadly it lost a tusk shortly after it was fired and he said tusk was somehow lost on the way home. Nonetheless, it is a very nice elephant.
Posted by Sarah at 11:38 PM