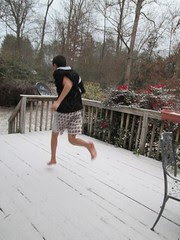 Snow!, a photo by Teckelcar on Flickr.
After numerous fits and starts, the much promised snow made its appearance. The schools had been shut down in anticipation of its mid-day arrival, so of course nothing really happened until about 4 pm. We could have easily snuck in at least a half day of school. Anyhoodle, we had a lovely day home.

Nate of course had to run outside barefoot. He does this every year and pretty much regrets it about three steps in. This evening he then "complained" that I was mean for making him put on shoes to take out the garbage and move the can to the curb. I replied that he was more than welcome to do the whole task barefoot if it was such a horrible thing to wear shoes. With a big smile he put on sneakers and went out sans coat. Turns out it is pretty cold outside.
He's such a silly boy.