It’s time for the Thursday Three courtesy of the Axis of Weevil!
This week it is all about cars.

1.) What is the strangest car you have ever owned? I have not owned any particularly strange cars. My first was a ’75 VW Super Beetle, light blue. 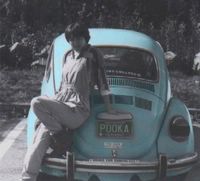 Me and my Super Beetle

Great car, I took it to college and I had for three years and turned the odometer over 100k before it rusted out. The most people I ever got in it were six. I was driving, my husband then boyfriend was up front and four of his rugby teammates stuffed in the back. I remember one guy was huge and another being crammed in the kangaroo pouch behind the rear seat.

When it rusted out I traded with my brother for his silver VW Rabbit. I guess it was the strangest due to the modifications. He put in a sunroof, a fake switch on the dash, a semi-functional equalizer for the stereo and a bogus Wolfsberg edition badge.

Next was a Nissan Sentra (new!), red with four doors. It’s greatest claim to fame was its trunk. It was huge. I joked that you could put a dead body in it. I drove it for seven years for over 100k miles. We sold it at the birth of our first child. We were moving and we needed something that could hold dogs and kids. It was in great shape and the new owners were able to sell it two years later.

Enter the Ford Windstar. Nice solid car. We got seven years and 120k miles out of it before it need a new head gasket and radiator. We decided since the trany was on borrowed time we should spring for a new car. Now we have a Ford Freestar.

2.) What is the worst car you ever owned? All have been pretty good. I have been able to get over a 100k miles out of them. My mom had a series of stinkers. She had two 4 wheel drive Subaru station wagons. Absolutely no fun to drive. She agreed, but she wanted the 4 wheel drive, because we were in VT and they were the only car she could get. One had the license plate UXB as in the show Danger UXB. Enough said.

3.) How many wrecks have you been in? Let’s see. I was in one when my Mom was driving. It was the early 70’s and we were in her green VW Beetle. A cop on a blind curve crossed over and totaled the car. My brother and I were riding in the back and were fine until the cop looked in the car. We both promptly burst into tears. The police actually admitted it was their fault. Next one was when I was driving my Mom’s car. I was pulling into a parking space when the gentleman in the space next to mine backed up without looking, right into my Mom’s car. I clearly remember my brother turning to me and saying “Mom’s gonna kill you.” However it was the guy’s fault. Fast forward to December 1988. I was driving my Rabbit home after just getting a brake job. I stopped for a red light in front of the fire station. The guy behind me did not. This totaled the car. Four months later at a stop light in my brand new Nissan I was hit by a car whose brakes failed. In 2000 I rear-ended another guy when I misjudged the distance. When the cop asked me what happened I said it was all my fault. He was so stunned by my honesty that I did not get a ticket. My car was fine and he had some rear bumper damage.

4.) SPECIAL BONUS QUESTION! Recall for us your most memorable drive-in experience. Well once I went to a drive-in on the way back from Canada with my not yet husband, but the most memorable was way before that. Our local drive-in in White River Junction, VT had a family of very obese skunks. I remember sitting outside on a quilt with my friend watching the skunk go under our car. I gleefully went to the open window and told my brother that there was a skunk under the car. It was great fun watching him blanche. Generally the skunks never needed to spray. People would panic and toss their food at the skunks.

There you go, way too much information about me and my life with cars.
Posted by Sarah at 11:47 AM