On Tuesday the local weather forecasters were predicting in their voices of doom a major snow event.

On Wednesday the schools sent home notes with the following information:

*There could be a 2 hour delay even if there is only a little precipitation.
*We should watch the news; the 2 hour delay could change to a closing.
*If the weather arrives later in the day the schools could close early.
*Make plans tonight so your child will know where he/she might have to go.

It is a bit over done in my opinion. It is no change in my winter weather operating procedure. Of course I grew up in VT where we never had snow days and the schools closed once for a blizzard (really, I’m not kidding). Jake and Nate were excited with visions of 5 or more inches of snow in their heads when they went to bed. During the 11:00 pm news I noticed the voices of doom were gone. Instead it looks like the excitement will be to the north and to the west.

On Thursday the day dawned damp, grey and raining. Jake and Nate were disappointed. During the last snow event they got to make the enormous snowballs and snowmen in our back yard. This is a picture of what Nate did all by himself. 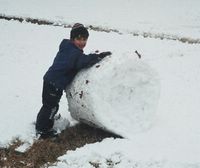 Oh, we got a brief flurry of snow and sleet as the school bus arrived at its normal hour, but it soon turned back to RAIN FOR THE REST OF THE DAY. I spoke with hubby during the day and I told him I thought it was just going to rain. I had to go to the dump and it almost always rains when I go to the dump.
Posted by Sarah at 12:13 AM