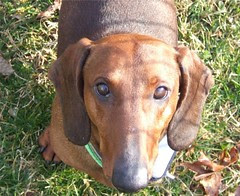 Dell2
Originally uploaded by Teckelcar
Sunday was spent on the road. After Hebrew school I took the kids out to IHOP and then onto Northern Virginia to pick up John's half-brother, Dell. (Larry was stuck home, he had to attend a t-ball coaches meeting.)

IHOP was quite an experience. We had a long wait since we arrived at the tail end of the post church rush and the start of the college crowd's "I just rolled out of bed and I want pancakes" invasion. The kids didn't notice it, but I found it funny to see tables of people in their Sunday best next to those that hadn't even bothered to change out of their jammies. I'm proud to say that I never went anywhere in my pajamas, except to bed.

Anyway, this is about a dog. My dear friend Dianne and her husband Andy offered Dell to us after Crunch passed. Dell needed a family of his own and John needed another dog to play with (playing with Nate is fun, but it's not quite the same.) We said yes and I went to go get Dell when we were ready.

Dell is a sweetie and John was ecstatic when he met Dell. I swear John has been going "OMG! OMG! OMG! ANOTHER DOG TO PLAY WITH ME!" So far there has only been one mild altercation after John bugged Dell a little too much. I only let them out together in short bursts and only if I can keep a close eye on them. Things will settle down with time and I won't have to watch them whenever they are together.

So now we are back to having a couple of red boys in the house, torpedoing around and crashing to each other.
Posted by Sarah at 11:49 PM